Contents hide
1 TL;DR (Too Long; Didn’t Read) Post Highlights
2 But, You Do Have to Respond.
2.1 Let me tell you about a time where I played the troll.
3 First Opportunity: Resolve and Defuse
4 Second Opportunity: Answer Questions, Mentions, and Comments
4.1 From HootSuite, in the last days of 2012:
4.2 From LinkedIn, a couple of summers ago:
5 Third Opportunity: Monitor and Thank
5.1 From Zillow, this fall:
5.2 And, as they say, one thing led to another…
5.3 Anyway, we’re like besties now.
6 Fourth Opportunity: Active Listening and Outreach
6.1 One of My Favorite Things
6.2 Okay, here’s how it works.
7 Your Turn: How Do You Do Social Customer Service?
We Love Shares! Spread the love:

Brands should see social customer service not just as a responsibility and a privilege, but for the opportunity it represents.

But, You Do Have to Respond.

You have to respond promptly, politely, and properly to all comments, questions, concerns, complaints.

Yes, even to the trolls. Remember that story from a few years ago, which resulted in the hit viral video and song “United Breaks Guitars“?

I’d skipped the video until I was preparing this post. It’s worth the watch, you guys, especially the chalk outline and the funeral for that poor lost Taylor guitar.

More to the point, it turned out to be worth more than 15 million watches. This incident is now codified in “Social Media History” and has been cited in HBR case studies and trade lore ever since.

Here’s Upwork with the takeaway lesson:

This PR snafu could have been avoided with a bit more delicate care and a quicker response on United’s part, but it underscores just how important it is for companies to take social media, and the power these platforms give customers, very seriously.

In another time and place, a celebrated German-language poet gave us almost exactly this same model for dealing with trolls:

Perhaps all the dragons in our lives are princesses who are only waiting to see us act, just once, with beauty and courage. Perhaps everything that frightens us is, in its deepest essence, something helpless that wants our love.

Let me tell you about a time where I played the troll.

I was the fire-breathing dragon. I was mad as heck at American Airlines and I wasn’t going to take it anymore.

With prompt TLC from their social media desk, my hangry troll-dragon-self got fed and I became a princess once more. Er um, a brand advocate for American Airlines.

(With regard to feeding of trolls, it reminds me of those those Snickers commercials, “You’re not you when you’re hungry.”)

Why ever was I mad at American Airlines, you ask?

I was going to the Mayo Clinic in Rochester, Minnesota, to figure out what was wrong with me. (I’m fine. Don’t worry. Stay with the story.) I had been told that most carriers offer discounted flights for Mayo patients.

I’ll let my tweet stream take it from there. (You’ll note from the timestamps that I type real fast.)

Holy Are You Kidding Me? Did American Airlines just place me on hold for 30 minutes? cc: @AmericanAir

Yes, @AmericanAir's IVR sys, I do know I can book online. I'd like to know, do you give discounts for patients traveling to @MayoClinic?

While I'm on hold with @AmericanAir, I've got nothing better to do than tweet about it. I can't wait to find a resolution to this.

Since I'm going to the @MayoClinic next week, I've got lotsa phone calls to make. I'm not sure I can wait on hold with @AmericanAir.

I apologize to @AmericanAir's twitterer; I'm being a troll. Surely, you've been on hold, tho. Lousy, staticky muzak, interrupted too often.

It's not my first rodeo. I know I'm on hold until I hear a human voice. You don't have to keep telling me. That's what the music means.

15 minutes in & I'm bored as hell. I've got records to request, room to book, car to reserve, bags to pack, and oh yeah, a FLIGHT to book.

TWITTERERER Scores!!
RT @AmericanAir: @smhoenig We're sorry for the long hold time. Please follow us, so we can DM you some details.

Ah, seriously tho, we should have laid bets. THANK YOU, @AmericanAir Twitterer, you so rock. I'm gonna hang up and book it now. MUAH!!!

Big ups, again, to the social media crew at @AmericanAir. They hooked it up. I've now got the flight plans HANDLED. Now for records.

I've been telling everyone in and around @MayoClinic just how well @AmericanAir has cared for me. Big love to both agencies of my health.

To recap, while I was still on hold with the 1-800 number, American Airlines interactive voice response (IVR) system, I was able to purchase discounted tickets to Rochester.

All thanks to the Twitterer at @AmericanAir. Saved me time. Saved me hundreds of dollars. Saved me energy for all the other chores I had left.

As you can see, ten days later, I was still singing their praises publicly on the social channels and to any Mayo administrator who asked anything conversational, like, “Where are you visiting from? Did you have a good flight?”

I told anybody who would listen. And, now I’m telling you.

That is an example of social customer service par excellence.

And, why it pays off.

Let’s look at some other companies who serve their customers well on social media. And how!

You know who’s really good at this?

HootSuite and LinkedIn. After all, they’re in the social space. All day e’ryday.

Here are a few of my personal favorite interchanges I’ve had with them over the years. One user posted a question to her public and didn’t tag HootSuite, just mentioned them.

I thought I knew the answer — apparently, that’s a thing with me. Plus, I tagged them because I knew how Johnny-on-the-spot their social help desk is.

Bingo bango, they popped into our “private” conversation, excused themselves for intruding, answered the question to hand, and wished us a Happy New Year! How on the ball are they!

From LinkedIn, a couple of summers ago: Sometimes social media channels and other software-as-a-service (SaaS) goes down. If it’s really down, you’ll usually see a flurry on the social channel of your choice with users asking if anybody else has noticed an outage. The above is a fun exchange with the crew at LinkedInHelp, giving a clinic on social customer service.

The previous examples show users asking questions, directly or indirectly, of a brand.

But users don’t always ask questions. They certainly don’t always take the time to ferret out your brand’s social handle so as to make you aware of their commentary.

That’s why brands use all manner of monitoring and listening tools, from highly-trained personnel (not interns) to Google Alerts to enterprise-level SaaS that finds, tracks, stacks, and deciphers all the mentions that a brand gets on the interwebs.

It slices, it dices, and it never loses its sharp edge! Wow!

Here’s my favorite example of a brand “monitoring and thanking,” or as we used to call it, “just a good pick up.”

From Zillow, this fall:

I don’t know what systems Zillow’s got running on the back end or what their social media department’s “dashboard” looks like, but one fine day I shared this gorgeous house to my Twitter feed.

I could handle snow for a place like this: http://t.co/dAKLis7iCT

They must get pinged every time somebody shares one of their houses (links). I was tickled to receive their quick response:

@SMHoenig We'll keep an eye on this one while you pack your parka!

Having worked for so many years on their side of the social media desk — and we’ll get to that shortly — I thanked them right away.

And, as they say, one thing led to another…

I'm super duper excited to get a thank you gift — Real Mail! — from @zillow. pic.twitter.com/Gq04ckQlYE

Seriously, I go to sleep too late at night looking at houses on @zillow. And my morning's about to get better! pic.twitter.com/dAqKnKWlvc

OMG! I love the @zillow social media crew. How freaking cool is this! pic.twitter.com/0vMedYX5tt

Holy Moses! It's the best multi-tool ever! @zillow, I love you guys. pic.twitter.com/eWESfA9uc7

I’ll spare you the subsequent tweets where I get alternately weepy and Whovian. It’s not germane here.

As promised, the last brand opportunity within social customer service comes from my time behind the Twitter desk.

For a time in the early 20-teens, I was the social media department at the Himalayan Institute. You may have heard of them as the publisher of print and online magazine, Yoga International.

You may have heard of them from Oprah. After all, they’re the originators of the ceramic neti pot here in the States. 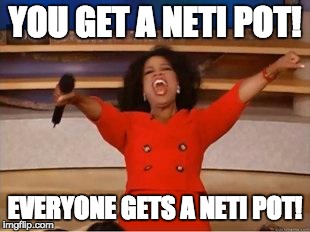 When her audience all got a neti pot to take home that day, the Oprah bump generated substantial funds for the Institute’s Humanitarian Projects. Yay!

One of My Favorite Things

Actively listening to the public and reaching out — with gifts! — just like Oprah!

It’s a powerful way to develop relationships with your existing community and grow your sphere of influence.

That sounds frilly and nice, but what does it mean?

Okay, here’s how it works.

You snoop a little.

I had neti pots to sell.
You have widgets.
Or services.
Or whatever.

How did I know they needed neti pots?
I searched on allergies, sinus infections, headaches, rhinitis, coughing, sniffling, sneezing, you know.

When I found people complaining about these, I checked them out. Yup, I creeped. I looked at how many followers they had, how active they were, if they were anywhere near our target demographic.

If they looked “promising,” I’d reach out as the brand, much like Zillow did with me, and, well, chat ’em up.

If that went well, I’d ask in a private message for their address so we could send them a little get-well gift.

Then I’d clear it with my boss, run down to shipping, wrap it up with pretty paper, include a handwritten note on branded stationery, and make like Santa. All with the hopes that they’d “like” us, like it, tell their friends, “unbox” it on a social channel, and think fondly of us ever after.

Your Turn: How Do You Do Social Customer Service?

And, if you’re not yet doing it, how can you start?

Here are some ideas:

These are just a few examples and ideas of how you can grow your brand meaningfully and fruitfully by being of service on social media. We’d love it if you shared your favorites in the comments below. Then we can all grow our practice.